Veganism is an answer to the climate crisis, despite what the critics say

It is not helped by simplistic arguments on any side of the debate.

Food is much more complex than say, electricity generation or transport, because it brings together so many different interlocking threads, not least our different cultures and trading practices around the world; it cannot be glibly addressed through some technical silver bullet or indeed any single prescription.

Although it seems perfectly possible to have rewilding without conflating this with meat production for human consumption, Knepp Castle Estate clearly see these twinned in their overall vision for the Estate.

Knepp Castle Estate have done some wonderful work in their experiment to rewild the Estate’s farm and this has yielded some great results in promoting biodiversity on the farm.

It is therefore disappointing that Isabelle Tree – who runs the Estate with her husband Sir Charles Burrell – decided that the way to counter what she believes are simplistic “exhortations” in favour of veganism is to use strawman arguments, which I will come to in a moment.

In her article “If you want to save the world, veganism isn’t the answer: Intensively farmed meat and dairy are a blight, but so are fields of soya and maize. There is another way” (Guardian, 25th August 2018), she offers a vision of meat produced on a rewilded farm as an alternative.

The article ends with a statement I think can be defended (even if I disagree with it):

“There’s no question we should all be eating far less meat, and calls for an end to high-carbon, polluting, unethical, intensive forms of grain-fed meat production are commendable. But if your concerns as a vegan are the environment, animal welfare and your own health, then it’s no longer possible to pretend that these are all met simply by giving up meat and dairy.”

The key words here are “simply by”, because of course, any diet begs a lot of questions on how food is produced, processed and transported. We all agree it is complicated.  We can all agree that a goat farmer in the Himalayas cannot simply adopt the practices of a farmer in England’s green pastures. We need to respect cultural and geographic diversity.

Except her last sentence does not address crop production methods, but simply asserts:

“Counterintuitive as it may seem, adding the occasional organic, pasture-fed steak to your diet could be the right way to square the circle.”

The problem is that to feed the UK or feed the world, we need to know what this means in quantitative terms, and there is really no indication of what a balanced omnivorous diet would look like or how to scale up the Knepp Castle Estate experiment, even for the UK.

Today, the reality of the impact – both in ecological and climate terms – of the meat industry is pretty terrifying, as the Friends Of the Earth laid bare in their 2008 report  “What’s feeding our food? – The environmental and social impacts of the livestock sector”.

We need alternatives, for sure, but any changes will take a long time to make a dent on a global scale. The world could simply follow the example of India with it relatively low level of meat consumption, but any proposed system must be able to scale effectively.

Protein from livestock requires much greater land use, and also puts huge pressure on water resources, and as noted in the study ‘Redefining agricultural yields: from tonnes to people nourished per hectare’:

“… shifting the crop calories used for feed and other uses to direct human consumption could potentially feed an additional ∼4 billion people.”

And if our goal is to address climate disruption as well as sustainable agriculture, the land will be in demand for other purposes: crops for human consumption; re-forestation; bio-energy crops; renewable energy assets; etc.

Meat production whether it is intensively produced, or in a rewilded context, cannot wish away the basic fact that it is a relatively inefficient way of using land to produce calories.

The UK currently imports over 40% of its food, and on top of that imports soy and other crops for feed for livestock. Of the land we have in the UK, about 50% is given over to grassland for livestock, as illustrated in this Figure from the Zero Carbon Britain Report: Rethinking The Future: 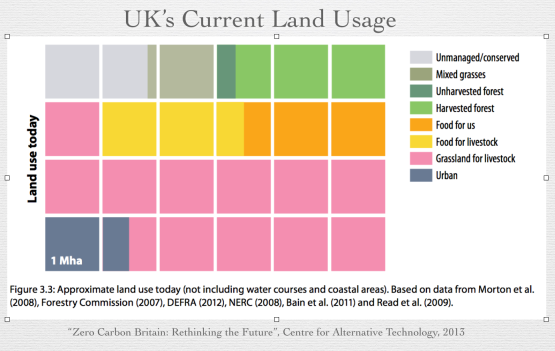 The Centre for Alternative Technology’s alternative, set out in the same report, is aimed at getting the UK to zero carbon; balancing all the sectors that are involved, including food production, but recognising we need to fit everything required into the available land. They arrive at a radically different distribution of land-use: 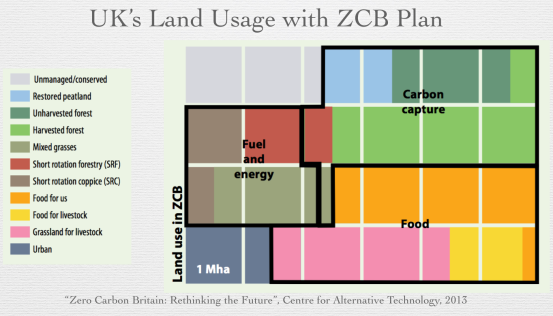 In their scenario, livestock are not eliminated but are radically reduced.

What is most disappointing about Isabella Tree’s piece in the Guardian is that she feels the need to use Strawman Arguments to support her case (which immediately suggests it has some holes in it):

“Rather than being seduced by exhortations to eat more products made from industrially grown soya, maize and grains, we should be encouraging sustainable forms of meat and dairy production based on traditional rotational systems, permanent pasture and conservation grazing.”

My Response: Well, since most of those crops are grown for animal consumption, that is another reason to release that land to grow sustainable crops (in soil-carbon caring ways); for forests; for bio-energy crops; for human habitation; etc.  The net result of low intensive meat production is that we would need to massively reduce meat production.

“In the vegan equation, by contrast, the carbon cost of ploughing is rarely considered … up to 70% of the carbon in our cultivated soils has been lost to the atmosphere”

My Response: Untrue. Why do we have the permaculture movement, low-till systems, etc.? And to stress again, the majority of the cropland in UK and US, for example, today is to feed livestock. If we want to improve soil carbon there are many ways of doing it.

I could go on.

She implies that the proposed method of farming will make a big impact on soil carbon sequestration, and there is no doubt that soil plays a hugely important role in carbon sequestration, but this is an area which is very complex. It is reassuring that the article does not make outlandish claims (such as those made by Savory, see Note 2), but again, there is a lack of any estimates as to the extent to which the proposed farming practices would mitigate increases in greenhouse gas emissions. Plausibility arguments won’t cut it I’m afraid.

For those interested in exploring all the questions touched on so far and more besides – with the benefit of some science to back up claims –  they could not do better than look at a few of the excellent food research organisations in Oxford.

Isabella Tree acknowledges that we need to reduce meat consumption. No doubt she would agree that the sky-rocketing consumption of meat in China and globally is unsustainable. Here is the current picture: 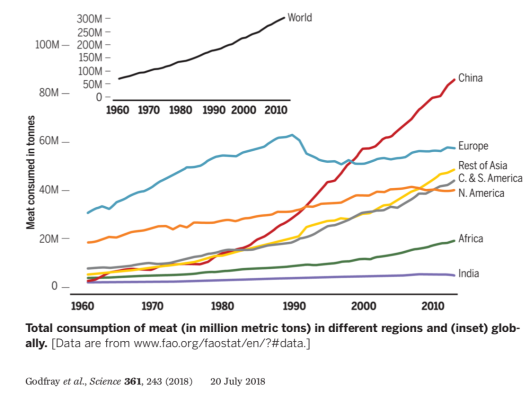 And as Godfray et al. state in the paper from which I took this Figure:

“It is difficult to envisage how the world could supply a population of 10 billion or more people with the quantity of meat currently consumed in most high-income countries without substantial negative effects on environmental sustainability. “

Yes, it is much more complicated than simply choosing one’s diet, and we must all take care to consider the processes and pathways by which we get our food and how land is used – whether we eat meat or not.

But for many, veganism remains an increasingly obvious option to make an immediate dent in one’s carbon footprint, and it remains a perfectly justifiable choice, whether from an environmental, ethical or scientific standpoint.

It is by no means clear that even as a portion of our weekly diet, rewilded meat will be the solution to the world’s environmental and sustainability challenges, or at least on the timescales required. Veganism can make an immediate impact.

In fact, without a whole lot more vegans on this planet, it is difficult to see how those who want to remain meat eaters can carry on doing so with a clear conscience, given the current (as opposed to, wished for) farming practices.

In the future, meat eaters may have to pay a lot more to eat meat and even then give a big nod of thanks to vegans for making a space for them to do so.

If Isabella Tree’s article was entitled “If you want to save the world, veganism isn’t the whole answer: Intensively farmed meat and dairy are a blight along with the fields of soya and maize they depend on. But there is a case for low levels of meat consumption.” …          it would have been less catchy but at least defensible.

Knepp Castle Estate are doing great work showing how to promote biodiversity on their farm, but as a model for feeding the world and preventing dangerous climate disruption, by 2050 or earlier … they have failed to make a convincing case that they have a credible plan.

On our current emissions trajectory, the world “is likely to reach 1.5C between 2030 and 2052”. If we are to avoid a global mean surface temperature rise of 1.5C, net global CO2 emissions need to fall by about 45% from 2010 levels by 2030 and reach “net zero” by around 2050.  See Carbon Brief’s ‘In-depth Q&A: The IPCC’s special report on climate change at 1.5C’ for more details. The IPCC’s 1.5C report made it clear that the difference between a 1.5C world and a 2C world was very significant, and so every year counts. The sooner we can peak the atmospheric concentration of greenhouse gases (especially CO2, being long-lived) in the atmosphere, the better.

FCRN explored Savory’s methods and claims, and find that despite decades of trying, he has not demonstrated that his methods work.  Savory’s case is very weak, and he ends up (in his exchanges with FCRN) almost discounting science; saying his methods are not susceptible to scientific investigations.

In an attempt to find some science to back himself up, Savory referenced Gattinger, but that doesn’t hold up either. Track down Gattinger et al’s work  and it reveals that soil organic carbon could (on average, with a large spread) capture 0.4GtC/year (nowhere near annual anthropogenic emissions of 10GtC), and if it cannot keep up with annual emissions, forget soaking up the many decades of historical emissions (the 50% of these that persists for a very long time in the atmosphere), which some are claiming is possible.

2 responses to “Veganism is an answer to the climate crisis, despite what the critics say”