It seems only yesterday that the BBC was having to apologise for not challenging the scientifically illiterate rants of Lord Lawson … oh, but it was yesterday!

So how delightful to see another example of BBC journalism that demonstrates the woeful inability of journalists to report science accurately, or at least, to use well informed counter arguments when confronted with bullshit.

A Story by Owen Amos on the BBC Website (US & Canada section), with clickbait title “JFK assassination: Questions that won’t go away”  … is a grossly ill-informed piece, repeating ignorant conspiracy theories by Jefferson Morley (amongst others), without any challenge (BBC’s emphasis):

I know there’s a theory that if you get hit by a bullet from behind, the head goes towards the source of the bullet.

But as a common sense explanation, it seems very unlikely. That sure looks like a shot from the front.”

That’s it then, common sense.

If it’s good enough for Oliver Stone and Jefferson Morley, who are we to argue?

But wait a minute!

Are we to cast that aside and instead listen to a career conspiracy theorist.

You can if you must, but the BBC shouldn’t be peddling such tripe.

As Luis Alvarez, the Nobel Laureate, pointed out long ago, the head MUST kick back in order to conserve both Momentum and Energy.  You need a picture? 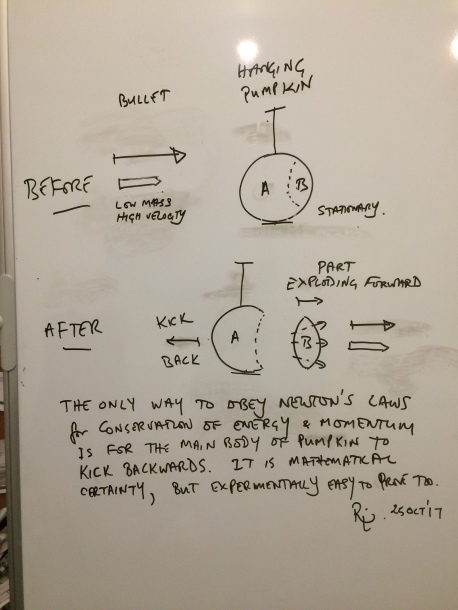 [I have not included the maths, but it is high school maths, trust me, you don’t need a Nobel Prize to do the calculation]

Morley would get a Nobel Prize if he disproved it. He hasn’t and won’t.

It seems that Morley has been doing the rounds in the media, and there is no problem finding gullible victims.

You might like to look at the Penn & Teller video of 2006 which demonstrates the physics in practice (with a melon), for the Newtonian sceptics like Morley.

Amos/BBC is gullible in uncritically replaying this nonsense, without mentioning Alvarez. Amos could have said something like

“this rationale (the head kick back) for a second gunman is completely unfounded as it flies in the face of basic Newtonian mechanics .. see this video“

Unfortunately this fails the clickbait test for irresponsible journalism, which requires ‘debate’ by idiots in response to experts. It’s balanced reporting after all.

Why are journalists so incapable of understanding 300 years old basic physics, or so carelessly cast it aside. The same physics, by the way, that helps us design airplanes that fly, and a major pillar in climate science too (the science that so persistently eludes Lord Lawson).

I am waiting patiently for another BBC apology for crimes against scientific literacy and an inability to ask searching, informed questions of peddlars of bullshit, be they Lawson or Morley.