The Guardian reported “We have 12 years to limit global warming, warns the UN”, and many others published similar stories, following the latest IPCC report.

Well not quite that simple, but let me explain.

I want to start with a quote from Risk, statistics and the media: David Spiegelhalter’s IPSO lecture :

“there are some fundamental difficulties with story-telling from data. Classic narratives have an emotional hit to the reader, they reveal a clear causal path, and have a neat conclusion. But science and statistics are not like that – they can seem impersonal, they don’t have a clear chain of causation, and their results are often ambiguous.”

In other words, when we convey facts through narrative we often seek certainty whereas paradoxically, scientists are the ones often having to grapple with uncertainty and ambiguity. In our popular imaginations, we might think that the reverse was true.

Yet on global warming, the irreducible uncertainty is increasingly concerning the when, not the if, of serious impacts. By debating the when (and trying to put a date on it), we are in danger of losing sight of the grindingly unavoidable fact that if a tsunami is heading your way, and you are on the beach, the exact ‘when’ is somewhat academic; the imperative is to run like heck to high ground!

We are already experiencing the impacts of global warming thanks to a rise of about 1C rise in global mean surface temperature (GMST). The impacts of man-made global warming are seen in thousands of places and contexts, and to cite just two – the rapid decline in the population of the European pied flycatcher; and the increasing severity of wildfires in California – illustrate how diverse these impacts can be.

So the questions being raised – how bad could it get and how soon – fit on a spectrum of possibilities. Our responses also fit on a spectrum, concerning how much work we are prepared to put in to limit the impacts.

How much urgency are we prepared to put in to limiting the impacts or adapting to them, and will this be fair to everyone? Will it be fair to the energy poor of the UK, to rural Indians, to the flora and fauna already experiencing catastrophic losses (and set to escalate)?

The context for this latest report was the Paris Agreement – arising from the  21st Conference Of the Parties (COP) to the UN Framework Convention on Climate Change (UNFCCC) – held in Paris in December 2015. Hitherto, the UNFCCC had discussed policy aimed at ‘avoiding dangerous climate change’, which was deemed to be a 2C GMST rise. The UNFCCC in Paris was basing policy in part on the scientific input of the 5th Assessment Report by the IPCC (Intergovernmental Panel on Climate Change) published in 2013/2014. However, low lying countries and those prone to the worst impacts of climate change requested that there be an investigation on the feasibility of limiting the GMST rise to a more ambitious 1.5°C, and also determining the benefits (in terms of reduced impacts) of 1.5°C as compared to 2°C.

The IPCC’s Summary for Policymakers of the 1.5C study includes the statement:

“Human activities are estimated to have caused approx. 1.0°C of global warming above pre-industrial levels, with a likely range of 0.8°C to 1.2°C. Global warming is likely to reach 1.5°C between 2030 and 2052 if it continues to increase at the current rate. (high confidence)”

So, strictly speaking, it is ‘likely’ (meaning at least a 66% chance; for those that read footnotes) that we have between 12 and 34 years before we cross the 1.5°C threshold, unless we do something to improve on this prognosis.

So is 1.5°C more special than all the other thresholds laid out before us? Well, it is an upcoming and fast approaching threshold, and so, theoretically avoidable.

“The first is that limiting warming to 1.5°C brings a lot of benefits compared with limiting it to two degrees. It really reduces the impacts of climate change in very important ways,” said Prof Jim Skea, who co-chairs the IPCC.

The 1.5°C report found – to the surprise of many – that there were significant benefits to keeping GMST to this lower level. For example, by 2100:

We see how there is a definite ‘non linearity’ occurring in some of the examples.

For some natural systems that have been able to recover to naturally occuring extremes in climate in the past, the future is a marked change. The effect of repeated, closely spaced extreme conditions means that they then fail to recover. Like a boxer that has been floored, they may get up once, or even twice, but at some point they stay down.

So coral reefs are hurting badly today (in a 1°C world), and will manage to cling on in a 1.5°C world, but will disappear in a 2°C world. This is a graph where the line falls off the cliff; no comforting linearity here.

A key concept introduced in the 5th Assessment Report was the ‘carbon budget’ – the maximum amount of cumulative carbon emissions allowable to stay within a target GMST rise.

The news which, if not good, is at least something of a relief, is that the so-called ‘committed warming’ due to emissions to-date (all that heat locked up in the oceans that will continue to drive increases in atmospheric temperature / GMST rise until the system reaches equilibrium again), is less than 1.5°C; although changes (e.g. to sea-level raise) will continue for centuries to millennia.

The IPCC make it clear that achieving 1.5°C would require rapid and far-reaching transitions in energy, land, urban and infrastructure (transport and buildings), and industry.

These system transition are unprecedented in terms of scale, but not necessarily in terms of speed (we have all seen how quickly cars replaced horse-drawn carriages in New York City), and imply deep emissions reductions in all sectors, a wide portfolio of mitigation options and upscaling of investments.

However, achieving 1.5°C cannot be achieved solely by decarbonising sectors, but must be supplemented by technologies that will take ‘carbon’ out of the atmosphere and effectively bury it. The 1.5°C pathways explored by IPCC assume between 100 and 1000 billion tonnes of carbon dioxide removal (CDR) over the 21st Century.

The most popular form of CDR currently being investigated is BECCS, which stands for Bio-energy with Carbon Capture and Storage. It works by growing plants/ trees that will capture carbon, and these are then burned to produce energy; but rather than re-release the carbon into the atmosphere, this is extracted from the exhaust gas stream, then buried in deep geological structures where CO₂ will remain in a condensed state.

The required transition can be summarised in a graphic (produced by Glen Peters from the CICERO Institute), consistent with the median scenario from the IPCC 1.5°C report: 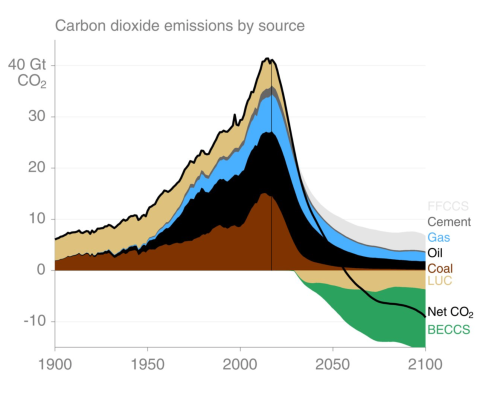 This graph illustrates that human activities would (by 2100) need to move from the current situation – a net source of 40 billion tonnes of carbon dioxide (40GtCO₂) – to becoming a net sink of -15GtCO₂. Coal would be eliminated, and oil would almost be; gas would be uncertain, but any that was used would need to be combined with CDR; land-use would need to move from being a net producer of greenhouse gas emissions to a net sink; and CDR/BECCS would have to be massively scaled up.

Many question the feasibility of such a large roll-out of CDR, requiring perhaps 2 or 3 times the area of India for the energy crops required (while at the same time, there are many other pressures on the land, not least, feeding a population that could grow/ stabilize at about 10 billion).

The graph above shows a complete change in the net CO₂ but this is like turning around a very large tanker on a sixpence.

Personally, I would conclude that the very tough challenge of keeping warming below 2°C has just got even tougher. The scale and range of changes needed requires something like a Marshall Plan for the whole world to stay below 1.5°C.

This is why many commentators such as Professor Kevin Anderson at the Tyndall centre in Manchester says that the only way we can square the circle is through a massive reduction in consumption (particularly amongst the high emitters). He has noted that if the top 10% of emitters reduced their emissions to the average European level, that would equate to a 33% reduction in global emissions!

We have run out of time to decarbonise all sectors fast enough, so are creating ‘magical thinking’ to imagine a scale of CDR that would allow us to continue to consume at the current rate (in the high emitting countries).

So the picture is mixed. Yes, the 1.5°C target is extremely important and worthwhile because it brings so many benefits as compared to 2°C. However, the already very challenging goal of decarbonising the world’s economy (both the established countries and those seeking justice and development), is made even harder.

Irrespective of whether you are an optimistic or pessimistic by nature, the fact is that we have to some extent already left it too late to avoid serious impacts. Whatever level of tolerance to risk we choose for ourselves and our families, by failing to seriously engage in action now, we are in effect making choices for our neighbours, for those communities and ecosystems that may not have the resources to adapt as well as we can.

Whether we imagine it is 0 years left to take action, 12, 34, or any other number that lies within the reasonable range between bad and catastrophic, we are really out of time. 15 years is a flick of the fingers in terms of transforming all sectors in all countries.

We should not hold up “12 years” as some magical number that is a binary switch between “we’ll be OK” and “it’s Armageddon”, but yet another milestone on the slow, and somewhat slippery path towards a very dangerous future.

Where each of us – as individuals, communities, countries or at whatever scale we wish to frame it – have started to take meaningful action, we should celebrate that and strive for wider and deeper change. Where this is not happening, we have to say that the sooner this process starts the better.

“The best time to start was 20 years ago, the second best time is now”

Let’s not wait another 12 years to act on the scale required.