It seems that the we are all – or most of us – in denial about the reality of the situation we are in with relation to the need to address global warming now, rather than sometime in the future.

We display seesaw emotions, optimistic that emissions have been flattening, but aghast that we had a record jump this year (which was predicted, but was news to the news people). It seems that people forget that if we have slowed from 70 to 60 miles per hour, approaching a cliff edge, the result will be the same, albeit deferred a little. We actually need to slam on the breaks and stop! Actually, due to critical erosion of the cliff edge, we will even need to go into reverse.

I was chatting with a scientist at a conference recently:

Me: I think we need to accept that a wide portfolio of solutions will be required to address global warming. Pacala and Socolow’s ‘wedge stabilization’ concept is still pertinent.

Him: People won’t change; we won’t make it. We are at over 400 parts per million and rising, and have to bring this down, so some artificial means of carbon sequestration is the only answer.

This is just an example of many other kinds of conversations of a similar structure that dominate the blogosphere. It’s all about the future. Future impacts, future solutions. In its more extreme manifestations, people engage in displacement behaviour, talking about any and every solution that is unproven in order to avoid focusing on proven solutions we have today.

Yet nature is telling us that the impacts are now, and surely the solutions should be too; at least for implementation plans in the near term.

Professors Kevin Anderson and Alice Larkin of the Tyndall Centre have been trying to shake us out of our denial for a long time now. The essential argument is that some solutions are immediately implementable while others are some way off, and others so far off they are not relevant to the time frame we must consider (I heard a leader in Fusion Energy research on the BBC who sincerely stated his belief that it is the solution to climate change; seriously?).

The immediately implementable solution that no politician dares talk about is degrowth – less buying stuff, less travel, less waste, etc. All doable tomorrow, and since the top 10% of emitters globally are responsible for 50% of emissions (see Extreme Carbon Inequality, Oxfam), the quickest and easiest solution is for that 10% or let’s say 20%, to halve their emissions; and do so within a few years. It’s also the most ethical thing to do.

Anderson & Larkin’s credibility is enhanced by the fact that they practice what they advocate, as for example, this example of an approach to reduce the air miles associated with scientific conferences: 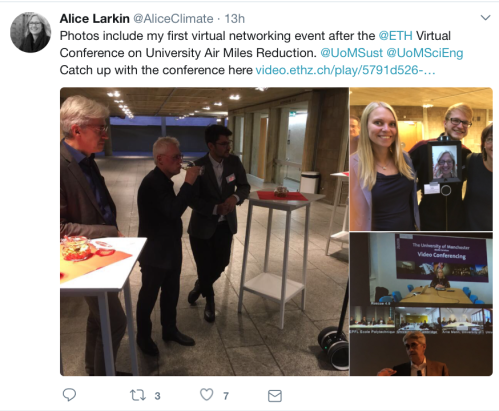 Some of people in the high energy consuming “West” have proven it can be done. Peter Kalmus, in his book Being the Change: Live Well and Spark a Climate Revolution describes how he went from a not untypical US citizen responsible for 19 tonnes of carbon dioxide emissions per year, to now something like 1 tonne; which is one fifth of the global average! It is all about what we do, how we do it, and how often we do it.

Anderson and Larkin have said that even just reaching half the European average, at least, would be a huge win: “If the top 10% of emitters were to reduce their emissions to the average for EU, that would mean a 33% in global emissions” (Kevin Andreson, Paris, Climate & Surrealism: how numbers reveal another reality, Cambridge Climate Lecture Series, March 2017).

This approach – a large reduction in consumption (in all its forms) amongst high emitters in all countries, but principally the ‘west’ – could be implemented in the short term (the shorter the better but let’s say, by 2030). Let’s call these Phase 1 solutions.

The reason we love to debate and argue about renewables and intermittency and so on is that it really helps to distract us from the blinding simplicity of the degrowth solution.

It is not that a zero or low carbon infrastructure is not needed, but that the time to fully implement it is too long – even if we managed to do it in 30 years time – to address the issue of rising atmospheric greenhouse gases. This has already started, but from a low base, but will have a large impact in the medium term (by 2050). Let’s call these Phase 2 solutions.

Project Drawdown provides many solutions relevant to both Phase 1 and 2.

And as for my discussion that started this, artificial carbon sequestration methods, such as BECCS and several others (are explored in Atmosphere of Hope by Tim Flannery) will be needed, but it is again about timing. These solutions will be national, regional and international initiatives, and are mostly unproven at present; they live in the longer term, beyond 2050. Let’s call these Phase 3 solutions.

I am not here wanting to get into geo-engineering solutions, a potential Phase 4. A Phase 4 is predicated on Phases 1 to 3 failing or failing to provide sufficient relief. However, I think we would have to accept that if, and I personally believe only if, there was some very rude shock (an unexpected burp of methane from the Arctic, and signs of a catastrophic feedback), leading to an imminent > 3C rise in global average temperature (as a possible red-line), then some form of geo-engineering would be required as a solution of last resort. But for now, we are not in that place. It is a matter for some feasibility studies but not policy and action. We need to implement Phase 1, 2 and 3 – all of which will be required – with the aim of avoiding a Phase 4.

I have illustrated the three phases in the figure which follows (Adapted from Going beyond dangerous climate change: does Paris lock out 2°C? Professors Kevin Anderson & Alice Bows-Larkin, Tyndall Centre – presentation to School of Mechanical Aerospace & Civil Engineering University of Manchester February 2016, Douglas, Isle of Man).

My adapted figure is obviously a simplification, but we need some easily digestible figures to help grapple with this complex subject; and apologies in advance to Anderson & Larkin if I have taken liberties with my colourful additions and annotations to their graphic (while trying to remain true to its intent). 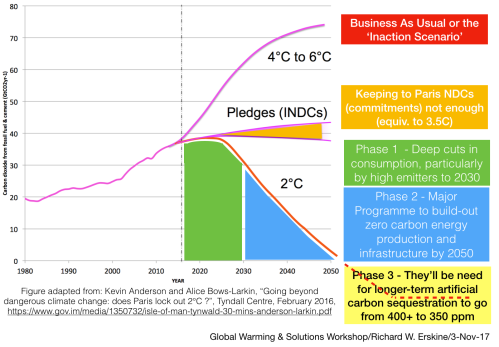 A version of this slide on Twitter (@EssaysConcern) seemed to resonate with some people, as a stark presentation of our situation.

For me, it is actually a rather hopeful image, if as I, you have a belief in the capacity for people to work together to solve problems which so often we see in times of crisis; and this is a crisis, make no mistake.

While the climate inactivists promote a fear of big Government, controlling our lives, the irony here is that Phase 1 is all about individuals and communities, and we can do this with or without Government support. Phase 2 could certainly do with some help in the form of enabling legislation (such a price on carbon), but it does not have to be top-down solutions, although some are (industrial scale energy storage). Only when we get to Phase 3 are we seeing national solutions dominating, and then only because we have an international consensus to execute these major projects; that won’t be big government, it will be responsible government.

And if your community wants a renewable energy scheme, then progressives and conservatives can find common cause, despite their other differences. Who doesn’t want greater community control of their energy, to compete with monopolistic utilities?

I think the picture contains a lot of hope, because it puts you, and me, back in charge. And it sends a message to our political leaders, that we want this high on the agenda.