But are you being honest?

In fact, it is fair to say that far from telling the truth you are in a sense lying or at least ‘dissembling’

That is what BP is doing with it’s latest massive ‘Possibilities Everywhere’ public relations and media advertising campaign, which was “jointly created by Ogilvy New York and Purple Strategies, with the films directed by Diego Contreras through Reset (US) and Academy (UK). The global media agency is Mindshare.”, as Campaign reports.

In a Youtube video on the initiative Lightsource BP is craftily suggesting it is seriously investing in solar energy, but don’t worry folks if the sun goes in, because we have plenty of gas as backup.

They want it both ways: claiming to be supporting renewables while continuing to push ahead with investments in fossil fuel discovery and production.

The on-going investments in upstream oil & gas development runs into many billions of dollars annually, which rather dwarfs the measly £300 million that Lightsource will be getting over three years by a factor of over 250.

This is not a serious push for renewables.

If they were serious they would have actual renewables energy generation (arising from their ‘investments’) as one of their Key Performance Indicators (KPIs) in their Annual Report. They don’t because they don’t actually care, and they don’t expect their investors to care.

No, this is what BP cares about (from the same BP Annual Report) … 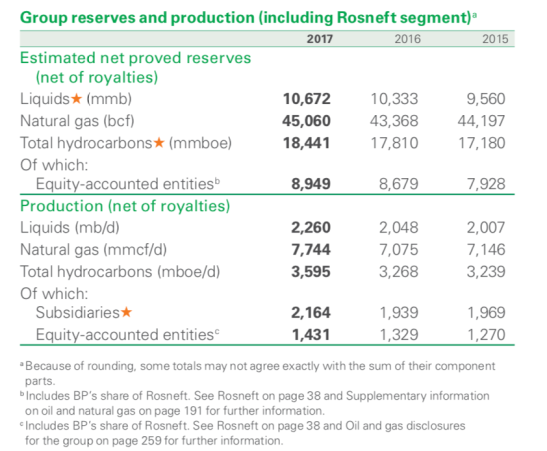 …. the value of their fossil fuel reserves. The more the better, because that has a huge influence on the share price.

In the Annual Report referenced above, BP states:

In a low carbon world, gas offers a much cleaner alternative to coal for power generation and a valuable back-up for renewables, for example when the sun and wind aren’t available. Gas also provides heat for industry and homes and fuel for trucks and ships.”

How do we decode this?

Well, what BP sees in a collapse of coal is a massive opportunity to grow oil & gas, but especially gas; they are not the only oil & gas company spotting the opportunity.

So they are not pushing energy storage for renewables, no, they are using intermittency as a messaging ploy to have gas as “a backup”.  So while 60% to 40% might look like a fall in profits, for BP’s gas investments it is a growth business, and less renewables means more growth in that gas business. So don’t get too big for your boots renewables – if we own you we can keep you in your place. Maybe you can rule when we have dug the last hole, but don’t expect that any time soon.

No amount of tinkering with emissions from production facilities or more efficient end-use consumption will avoid the conclusion that the “transition” they talk of must be a whole lot more urgent than the – dare I use the metaphor – glacial pace which BP are demonstrating.

Dissembling in respect of your commitment to the transition – which you intend to drag out for as long as possible it seems – will fool no one, and certainly not a public increasingly concerned about the impacts of global warming (and, by the way, also the impacts of plastics – another of your gifts to Mother Earth).

We are out of time.

By investing seriously and urgently in solutions that demonstrate a real commitment to the transition, and in planning to leave a whole lotta reserves in the ground, you can earn the trust of the public.

Change your KPIs to show you have read and understood the science on global warming.

Then you can build a PR campaign that demonstrates honesty and earns trust.

Until then, please, no more #BPGreenwash.

Filed under Transition to Low Carbon